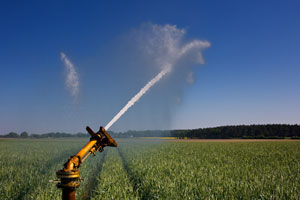 Traveler irrigation systems use a large sprinkler, also known as a “big gun,” that is mounted to a wheeled cart. The sprinkler is then moved across the field, so that it can spray water in a radius of 80 – 250 feet. There are two types of traveler irrigation systems, cable-tow travelers and hose-pull travelers, which can be used for a multitude of agricultural purposes.

A cable-tow traveler uses a large sprinkler that is securely mounted on wheeled car. A large, flexible hose is connected to the cart, while the other end of the pipe is connected to the water source. The machine is propelled through the field via the use of a steel cable that is wound around a drum or pulley system that is mounted to the cart. A water motor, turbine, or piston can be used to propel the cable winch. The cable used to propel the machine must be attached to an immovable object located at the edge of the field.

Using this type of irrigation system will require farmers to make an alleyway through the field. The alley or travel lane will need to be between 6 – 16 feet wide (depending on the size of the machine). Rocks and other abrasive materials should be cleared from the alley. Given the potential difficulties of sloping terrain, the cable-tow traveler irrigation system is best used on flat cropland. It can be used on a variety of agricultural products, such as peanuts, soybeans, corn, sunflowers, and other crops that are grown on flat land.

The hose-pull traveler features a large reel that is mounted on a wheeled cart, a large volume gun-type sprinkler that is also mounted on the wheeled cart, and a large semi-rigid polyethylene hose. The trailer mounted hose reel should be parked at the end of a travel lane; water is then fed through the hose to the sprinkler cart. The sprinkler cart is pulled along by the hose, and the hose is then wound onto the trailer-mounted hose reel. Water billows, a turbine, water piston, or auxiliary engine can be used to drive the hose.

The hose-pull traveler irrigation system can be used on a wide-array of terrain types. A travel lane doesn’t need to be used, except for low-growing crops, which makes the hose-pull traveler irrigation system more versatile than its cable-tow counterpart. It can be used for a number of plants, including: soybeans, peanuts, corn, turf, and other crops that can withstand the higher water pressures.

To learn more about the differences between cable-tow and hose-pull irrigation systems, contact the experts at W. P. Law, Inc. Since 1970, W. P. Law has been providing professional advice and helping members of the agricultural industry choose the best irrigation systems for their crops.