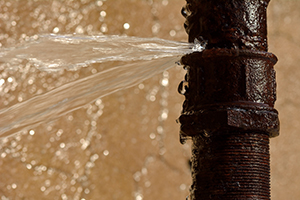 Periodically industries and municipalities will conduct pipe stress tests.  The purpose of these tests is to make certain that the piping system, which includes gaskets, valves, and fittings do not leak and maintain an acceptable level of safety.  These tests are often required by law: both the timing of the tests and the stresses the pipes are put under.  When laws do not set parameters for pipe stress tests, there should be policies that determine when and at what level the tests should occur.
As any piping system is used, and as it ages, leaks or other mechanical problems can arise which left unnoticed can eventually cause bigger problems.  A pipe stress test is a way to ensure leaks do not exist, and to fix them if the tests indicate leaks are present.  Similarly, when pipes are placed under additional and unusual pressure, they may move which can likewise lead to leakage.  Testing the pipes under unusual pressure can help detect where movement is likely to occur and limit the danger from this occurring.

Stresses can come from:
• Additional weight
• Temperature changes
• Changes in pressure in the pipe
• Changes in external pressure
• Vibration
• Wind, seismic shifts, and other acts

Stresses can be caused by sustained loads such as pressure and weight and they are in existence throughout the life of the pipe.  Pipe stress tests are looking for places in the piping system that might fail when the pipes are put in unusual situations—greater pressure than normal, sudden wind sheers, earthquakes—to determine if repairs need to be made before leakage occurs during the course of operation.

Gas and oil pipelines are tested by increasing the pressure to a minimum of 125% of the maximum allowed working pressure.  Often the amount of pressure to be used in a pipe stress test is determined by law.  The test pressure is higher than the pressure used during common operation.  The pipes are often filled with dyed water or oil so leaks can be easily spotted.  The pipes are then pressurized for 30 seconds or more, and the expansion of the pipes is measured.
If a leak does happen, testers will determine if the problem was due to a failure of the pipe itself or due to a poor seal of the test equipment.  Leaks are not the only way to determine if a pipe is inclined to fail.  Changes in length or diameter also indicate a pipe may not be safe.

If you suspect your pipe system is in need of replacement or repair parts, contact WP Law today.